The most recent National Partnership to Improve Dementia Care in Nursing Homes Antipsychotic Medication Use report from April 2018 shows how much success our industry has had in reducing the number of long-stay residents who receive antipsychotics. There has been a steady focus on this initiative by nursing facilities, and the associated chart provided with this report reflects the steady decline in the use of these medications. There has been a 36.6 percent reduction in use, which resulted in a national prevalence of 15.1 percent in Q4 of 2017. Nice work! 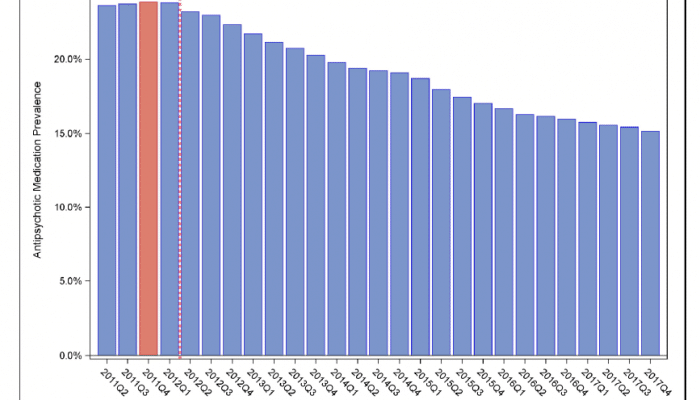 Special kudos should be given to 3 CMS regions that have seen more than a 40% change in prevalence since the beginning of the Partnership:

While the majority of the industry has made these strides together, CMS did announce that it had grouped “late adopters” who had/have limited reduction rates into a separate data set. The goal set for this group is a 15 percent reduction in the use of antipsychotic medications for long-stay nursing homes residents by the end of 2019. There are about 1500 facilities included in this list, with many states only having a handful of facilities included, such as 4 facilities in Wyoming and 3 in Delaware. Ohio and Texas, two of the bigger states, have the most facilities on the list, with approximately 100 each. Ohio has seen an 11% point difference from the measured period, and Texas has seen a 31.9% decrease. This report looks like improvement is being made across the board.